Fish Walks A Dog to Melbourne 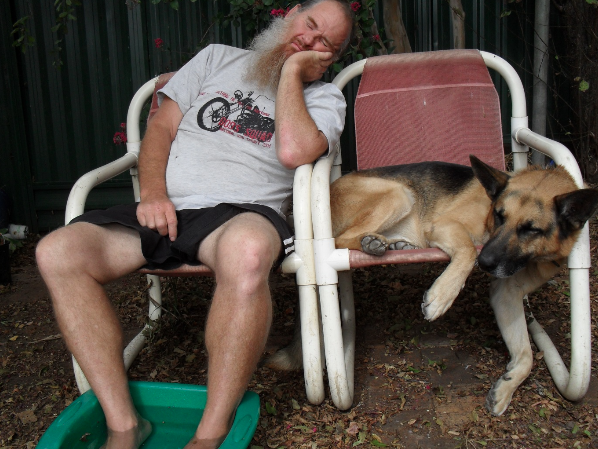 I recently had the pleasure of interviewing CLAN supporter Steve "Fish" Jones. After an interview filled with laughter and deep conversation I was left in awe of his accomplishments and dedication. Without further adieu I present to you an incredible story of an even more incredible man Fish:

Steve “Fish” Jones has been a supporter of CLAN ever since its founding days. Fish has been a longtime family friend of CLAN’s president Dr. Kate Armstrong and was a part of the family’s life when Kate and her husband welcomed their first-born child, born with Congenital Adrenal Hyperplasia (CAH), a condition that affects a child’s growth and development. The condition can be life threatening if not treated properly. Luckily however, Kate's child was born into a community with medication readily available and has been able to live a typical life, but that is not the case for thousands of children born in resource poor countries. The disparity between resource rich and resource poor countries served as a catalyst to the birth of CLAN.

Fish acknowledges that CLAN is able to stand out to him from other organisations because of his personal connection to the Armstrong family. Throughout the years Fish has been able to see projects that CLAN has been working towards and remarks that believing in what is happening has been instrumental in him supporting CLAN all these years.

Throughout the years Fish has been pleased with the recognition CLAN has received from agencies like the World Health Organisation and the United Nations Department of Public Information. He has been able to see CLAN’s strategic framework become a model accepted by others organisations around the world. Fish states, “To see that is very exciting. To think of the very small beginnings that was in caring for a son that was just born to being able to care for a whole lot of people that you would never be able to keep track of is very exciting and very amazing.”

Fish hopes to see CLAN continue to expand awareness and the availability of medication to help manage NCDs in resource poor countries. He also goes on to state, “the ability to communicate with different political organisations to care for the people within their countries is something that I would like to see progress.”

Throughout the years Fish has raised funds for CLAN in some rather unconventional ways. Leading up to his 50th birthday celebration Fish kindly asked guests to not bring him any presents, instead he asked them to bring money. Partygoers were in for a treat as they were given the chance to snip a bit of Fish’s beard off. Donations were accepted for a chance to snip the beard. Let it be known that when Fish walks into a room, the first thing you notice is his beard, so this was a pretty big deal!

Twenty-one years ago Fish was diagnosed with Type 2 diabetes. With a genetic predisposition to the condition, the diagnosis did not come as much of a surprise. As a way to manage his diabetes, Fish simply went on nightly walks with his dog Zeke. Over the years, daily walks have helped keep his blood sugars under control. The impact walking had on his health and the management of his condition inspired Fish to venture on the longest walk of his life.

Six years ago Fish embarked on a life-changing journey, stepping foot on a three-week trek from Sydney to Melbourne. On 2 May 2011 Fish left the comfort of his own home with a bag on his back and his dog Zeke by his side. For Fish and Zeke the day started off like any other, a casual walk down the street as though it was just another walk. Little did Fish and Zeke know that they were in for the trek of a lifetime.

Fish’s daughter’s father-in-law decided to take a little holiday and support Fish throughout the first leg of his journey. He would follow Fish’s path each day, meeting Fish for lunch and help by finding nightly accommodation. At the end of each day’s walk Fish would be picked up and taken to his accommodation and after a night’s rest Fish would be dropped off at the previous day’s pick up point to continue his journey.

Encountering challenges on a walk of this magnitude was inevitable, but Fish received encouragement at the right moments from the right people. Speaking of his journey to passer byers at his stops allowed him to remember what he was working towards. Fish would often receive donations for CLAN from individuals he met along the way. Great conversation along with generous giving motivated Fish continue moving forward.

A few weeks into the trip Zeke decided the journey was no longer for him and called it quits in the most dog way possible, he simply sat and refused to get up. After a veterinary examination and a suggested recovery time of one week Zeke was on his way back home, leaving Fish solo on the final part of his journey. Left alone with just his walking, his thoughts, and his God, Fish describes the remainder of his trip as a spiritual revival, allowing him to step out of his comfort zone and learn more about all that God has to offer.
​
CLAN is grateful Fish thought of us throughout his admirable journey. We would like to thank Fish for his incredible support throughout the years. Thank you for being the wind beneath our wings Fish!
A story by Stephanie Carde, CLAN Intern