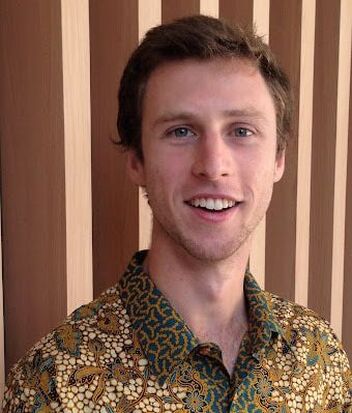 Joseph Freeman is just a few months from finishing his Doctor of Medicine at the University of Sydney, concurrently studying his Masters of Public Health. He assisted CLAN with their work in Indonesia, something he had a particular aptitude for due to his Diploma of Language, majoring in Indonesia. Prior to Jo’s postgraduate medical studies, he completed his undergraduate studies in 2017, a double degree: Bachelor of Philosophy and Bachelor of Medical Research. Upon completion of his current studies, Jo will be undertaking a PhD. He has a keen interest in international public health, with his Indonesian language skills supporting his prior role in the Indonesian Paediatric Society, reviewing WHO policies to ensure they are consistent with the society and hospitals in which they are implemented, as well as working alongside CLAN in supporting patient groups suffering from OI and CAH in Jakarta.

CLAN's Youth Advisors Grace and Sienna were fortunate to meet up with Jo to learn more about his story. Heres how our interview went:

What motivates you to work hard, and to do what you do?
Now - it’s just really fun. Health connects to everything. It’s a fun place to work and think. By laying down the groundwork in health, you can pretty much take it in any direction. Two sides of the same coin - you’re valued and it helps people. Altruism and societal validation. It’s a comfortable and fun place to put your energy into.

What inspired you to start working with CLAN?
I found it through the DFAT portal because I was doing the DFAT programs. I was looking for something that aligned with being in Indonesia, and I was learning Indonesian. I was trying to upskill, specifically in public health and specifically in Indonesia. Came into it without knowing much, despite on paper looking like I was kind of getting the hang of it.

What was your role with CLAN?
I was there dual with CLAN and the Indonesian Paediatric Society. More of what I did was for the latter. Reviewing WHO policies and checking that they were consistent with the society and hospitals. Translation in proofreading and copy editing. Supporting the CLAN patient groups, especially OI which was active in Jakarta at that time. Less so with CAH, organising and supporting their meetings. Semaran, Dr Agustini, translating an informational booklet for OI for women, a disease which verilises young women, which is hard for them culturally.

What notable experiences did you have with CLAN that impacted your worldview or perspective, or inspired you? In what ways were you impacted?
It’s not very specific but I think before going and being a bit younger, you get this perspective that the countries around you are much poorer. It’s a less functional and more complex environment in which you’re trying to create that outcome of health. Just being there and what I did left me with that.

What was the most rewarding thing about working with CLAN, and how have you carried that with you? Were there any key lessons you drew from this?
Being in the office with the junior doctors who were themself interning with the IPS. It was really nice and really amazing to get to know these health workers and knowing that they were working in a drastically different and more difficult situation. It’s amazing to get to know people in a foreign and difficult health environment.

Did working with CLAN open up new opportunities? In what ways?
The whole time of being there with CLAN and DFAT opened my eyes to the interesting job people could have with the AUstralian government and working with international government agencies. Specifically, I gained a commonwealth supported position for my place in my Master of International Public Health, which they told me was due to Kate’s letter she wrote in reference to the position.

What do you think you’d be doing, or how do you think your outlook would be different had you not worked with CLAN?
If I hadn't had any global health experiences in Indonesia, I would probably be getting into the mindset of most of my colleagues in medicine which is just within our borders. Now my perspective is that nationalism is one of the silliest things to exist. Borders that define health benefits. If I didn't have that experience I would only be focused on our health system instead of the broader global society.

Has your work with CLAN impacted the way you think about COVID or your actions relating to the pandemic?
I think there’s been quite a lot of societal recognition about how bad COVID will be and has been for countries with bad health systems; I also think there has been societal recognition that there wasn’t a lot we could do. We need to prepare our health system in advance, there isn't much you can do in a matter of months, you need to have decades of institutional trust which is so hard to build. Particularly just to think about the junior doctors I knew, they paid to do a residency, paying to go to work all day and do their training then going to do night shifts and doing night shifts to get by and have food to eat because they’re paying to tain, and they’re exhausted and unsafe without PPE.

Where do you see yourself in 5 years?
I see myself working partly in clinical and partly in health systems of some kind. If it was in an Australian context, it would probably be in a rural and remote context. It’s awesome to work clinically and deal; with people one on one but there’s so much to see. There’s so many jobs. I hope to cycle through a few of them in my lifetime just for the fun of it.