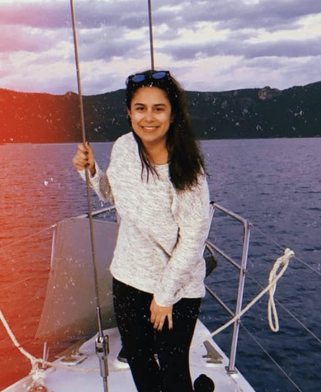 Meet Stephanie:
​
​Stephanie Carde was appointed CLAN’s Public Officer in 2019 after volunteering in a Marketing and Communications capacity since 2017. Stephanie joins us from the state of Connecticut in the USA. She is currently working as a Marketing Coordinator in the not-for-profit sector. Stephanie received her Bachelor's Degree in Psychological Sciences with a double minor in Neuroscience and Criminal Justice and is currently on track to complete her double Master's in Counter Terrorism and Criminology in November 2020.

Heres how our interview went:

Tell me a bit about yourself.
I work at a company called InMode and I do marketing for them. I did a double masters here at Macquarie University, Sydney. I did a Masters in Counterterrorism and a Masters in Criminology and that comes off of my Bachelors of Science and Psychology, and Neuroscience. I’ve been in Australia since 2017 and I work out in Baulkham hills, and live here in Lavender Bay which is kind of North Sydney area, but I’m originally from Connecticut, which is back in the States.

What inspired you to start working with CLAN?
I started off with CLAN in 2017. I applied through an internship program called ‘Global Experiences’. I was finishing up my Bachelors degree, and didn’t know exactly what I wanted to do next - if I wanted to directly enter into the workforce or if I wanted to do a masters. I was kind of a bit confused. I’ve always lived in Connecticut - it’s a small state in America. I went to the University of Connecticut, I was never more than 2 hours away from home, I saw my parents at least once a month and so I never really got to experience life as an adult, so I took the drastic measures and decided to come to Australia, and see how I’d do. So I applied for the internship, and they place you based on what experiences you want to get out of your internship, what you’re studying at school and what your interests are, so I just filled out the questionnaire and my program director interviewed me, and I met I believe it was Kate and at that time Julia was there as well, and I found out that I would be working with them. So that’s kind of how it started a little bit, just helping out and then it evolved as time went on.

What is your role with CLAN?
Right now I hold the role of Public Officer. I started off as an intern and I was mostly doing our newsletters, and when I first started at CLAN we were transitioning to the new website, so we had an old one - I was just making sure that some of the information we had on the old site wouldn’t get lost, when transferring to the new site. We were working on annual reports and all that fun stuff.

What notable experiences did you have CLAN that impacted your worldview or perspective, or inspired you? In what ways were you impacted?
I think CLAN helped me realise… essentially you always here stories of people in other countries that are less fortunate, or they’re going through some struggles, but it’s interesting to see people within our own countries - within Australia and within the US - that everybody kind of thinks is well off, but you have people struggling, children struggling, not getting the proper care or help that they need, so I think that kind of really opened up a new perspective for me.

What is the most rewarding thing about working with CLAN, and how have you carried that with you? Were there any key lessons you drew from this?
I think when I first started off at CLAN I never really had any experience in marketing or putting together the annual report or any of that stuff, and I kind of forced myself to learn it. So I just sat down one day and learned how to do everything, so it taught me that I could just, if I'm dedicated to it, do whatever I want pretty much. I think having these connections throughout the world, like I’ve spoken to Rabia a couple times in Pakistan, and I’ve spoken to Andrew - it’s just kind of nice, knowing everyone all over the place.

Has working with CLAN opened up new opportunities? In what ways?
When I first started at CLAN, it was just Cath, Kate, Julia and myself. So it was just kind of the four of us. We didn’t have any office space or anything. At that point Julia, she worked at Police Legacy, and they had extra office space, and Cath being closely tied to the NSW Police Force and having friends in the police force, they were able to get me office space there. So I started working there and because I was working there I did three days with CLAN, one day I went to Kate’s house and the fourth day I worked at Police Legacy to pay back the space that I was given for free. Through that I ended up getting a job and ended up staying in Australia for longer. I worked with Police Legacy for 18 months maybe, and it was a life changing role - I really enjoyed it - and if it wasn't for CLAN and their connections I wouldn’t have really gotten that role. Also CLAN opened up my eyes to the not-for-profit sector - I never really thought about it and I never thought that I could see myself in a role that was outside corporate, and now I can’t see myself in a role that’s not in the not-for-profit sector, that’s kind of my personality now, like I’ve learned to really get the most out of my job, making it fulfilling, and that’s all because of CLAN.

What do you think you’d be doing, or how do you think your outlook would be different had you not started working with CLAN?
I think I wouldn’t be in Australia. My life would be completely different I think. I don’t know if I would have gotten my Masters, because when I started at CLAN on my working holiday visa I was here for a year and then I really began to fall in love with the country and the people so I found ways to keep on staying in the country, and I decided to do my Masters and so CLAN kind of exposed me to this whole part of my life that I didn’t really think about. I just thought I was going to be in Australia for three months and then I’m here four years later. I don’t really know what I would be doing if I wasn’t - probably working somewhere in New York.

How has COVID impacted the area where you live?
So it’s impacted me I guess in a couple of different ways. I have no family in Australia - I just have all the friends that I’ve made that have become like my family. I have all my family back at home in America so during the beginning of the pandemic, I’m sure you guys have all seen everything in the news about New York and the overflow cases and everything. I lived about 40 minutes from Manhattan back at home, so pretty close. So it was kind of, while I was here, I had to decide ok like if I’m going to go I have to go home now, if not I’m kind of stuck here and for who knows how long. Then my dad ended up getting COVID which was a bit stressful as I was over here and there was kind of no end in sight to go travel again or visit or anything, and that impacted me a lot. I think it kind of just made me stronger. And then here COVID here, during the first lockdown here, I lost my job so I was unemployed and because I’m a foreign resident I didn't get any government support, so I kind of had to find a way to support myself for who knows how long. Luckily I got a job shortly after we came out of lockdown - I think it was about 2 months after lockdown I got a job - and then thankfully this lockdown we’re in now I’m employed and I'm working from home and it’s a bit different. It’s weird. I lIve alone as well and before we were allowed to have ‘bubble buddies’ or our ‘single buddies’ you know you kind of spent a lot of time by yourself. So yeah it has been a really weird couple of years.

Has your work with CLAN impacted the way you think about COVID or your actions relating to the pandemic?
I think CLAN helps me put a lot of things into perspective. You do see America, the United Kingdom, Australia, how cases are going up and things are quite bad at certain times, then you have to remember - especially with the vaccine distribution - it has to be distributed evenly. Why is the US more special than people struggling in Vietnam or Pakistan or Indonesia? It kind of makes you think more about the distribution of wealth and resources that countries get.

Where do you see yourself in 5 years?
In five years time I’d be 31. I see myself possibly starting a family, in a career that’s quite fulfilling. I don’t know whether I’ll be here or if I’ll be in America or somewhere else in the world. I’m kind of open to anything - wherever the wind takes me at this point. I see myself still working in the not-for-profit sector and trying just to make as many changes as I can with whatever environment I’m put in. I’m really passionate about organisations against human trafficking, so that’s kind of the field I want to work in, so hopefully I’m in a job somewhere along the lines of that.​