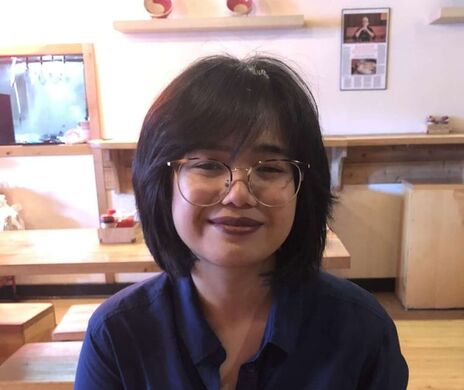 Meet Zuha
​
​Zuha is a third year university student at Carleton University in Ottawa, Canada, majoring in Anthropology and Literature. This led her to working with us at CLAN, where she has contributed significantly, compiling awareness messages and creating illustrations for future social media posts and projects. She also worked jointly with CLAN and IndigenousNCDs on the development of a toolkit for Aboriginal and Torres Strait Islander peoples with NCDs.

Heres how our interview went:

What motivates you to work hard, and to do what you do?
When I was with CLAN it was natural to want to work hard, as it was also technically my first time being an intern at a not-for-profit. Also, just the cause itself is something that you naturally become very passionate about, you care for it, you see and you read all these stories and you just naturally want to help and do anything that you can. I think that was a big part.

What inspired you to start working with CLAN?
It was motley because of the pandemic, where I was stuck inside. I was doing the later half of my semester from home and it was the holidays and obviously I had 4 months left just for myself in my room, and it was something to make the summer a bit more meaningful. It was just… you’re indoors all day, it’s all very drab and boring and dreadful, and honestly a little bit depressing when you’re not allowed to go out and see anyone. I actually did CLAN through ‘Global Experiences’ which is like a university affiliate program, so I found CLAN through them and I actually applied for something related to marketing and I didn’t expect it to be child health and IndigenousNCDs and I was actually really relieved when I got an offer from CLAN. I was like child health - that’s something I’ve secretly been wanting to really do and I’ve been thinking about taking a course. And when you’re in the social sciences I think it’s really good to kind of just see what different things you can do outside of what you’re studying and what really matches with your personality and your strengths. So I went with CLAN because I secretly really like what they’re doing and this is something I wish I could study but it’s not really related to my studies. It ended up being really helpful and I think it really changed my perspective on what kind of work I want to do in the future as well. So I’m very grateful to have worked with CLAN.

What was your role with CLAN?
I came on to do a lot of writing for CLAN and I did do some research related to the impact of language or lack thereof in the health sector and what health workers in Australia can benefit from actually adopting Aboriginal languages and how that could influence health outcomes for Aboriginal and Torres Strait Islander peoples. Then I ended up doing more illustration-based stuff - I did a bunch of artwork as you guys have seen, and my supervisors actually liked that so that’s what we carried on with instead of more writing. I just ended up doing a lot of art and for IndigenousNCDs I kind of did more writing and research stuff.

What notable experiences did you have CLAN that impacted your worldview or perspective, or inspired you? In what ways were you impacted?
It was the ‘Our Views Our Voices’ meeting conducted by NCD Alliance and it was just a bunch of people from all over the Asia-Pacific Region and everyone was just speaking about how we can make an impact for people with NCDs and yeah it was really amazing being in that environment and seeing how people were really trying to empower everyone and just show that NCDs aren’t like a sentence for life, it’s not something that impairs you, it’s something that you can actually just… it’s a part of your life but it doesn’t have to take away all these opportunities. So I thought that was very eye-opening and it really changed my perspective and it really also made a point of the importance of inclusivity and diversity in every possible way. Yeah that was an amazing experience.

What was the most rewarding thing about working with CLAN, and how have you carried that with you? Were there any key lessons you drew from this?
I guess the most rewarding thing is having a work culture that’s very open and very casual, but still very educational. Having supervisors that are very open to your input and what you have to bring to the table as really just… it was enjoyable above everything. It obviously taught me a lot about having to communicate what my needs are as an intern, but also just taught me how to incorporate my strength into the work I do, and actually speak up for those strengths and taking work that I would naturally be good at, because it’s something that I already value in myself and it’s something that I may have some sort of innate talent for. So I thought CLAN really nurtured that part of me as an internet.

Did working with CLAN open up new opportunities? In what ways?
I guess it’s more so in the sense of I know what work I want to pursue. I know what kind of work I don’t want to do in the future as well. It’s really taught me that hey this is kind of what I want to keep doing, so in that sense CLAN has really helped me navigate my future career plans. I think that is mainly how it’s been very helpful.

What do you think you’d be doing, or how do you think your outlook would be different had you not worked with CLAN?
Had I not worked for CLAN I would not have really understood the importance of not-for-profit and also bringing in empathy and creativity into the work that you create, and even with writings it was very important to approach it from the viewpoint of who is going to be reading it, rather than trying to be as informative and as educational as possible, it’s important to cater it to the culture that I want to target. A lot of my writings in the beginning used to be very university style and very wordy, but working with CLAN and IndigenousNCDs really helped me understand the importance of simplicity and the importance of really knowing how to communicate with a large audience.

How did you engage with the different cultures that you mentioned? And how did they benefit from that simplicity?
The most important aspect of it I think was trying to incorporate the visual part, because not everything that you want to say is going to be translated. So bringing in the visual cues, bringing in the drawings itself was already something that translates across a lot of cultures. Some cultures don't really value… they value visual elements more so than just having information and infographics. Infographics with that visual part is so important, so I think bringing in images was the biggest thing.

How has COVID impacted the area where you live?
Maldives is very small, so it was very quick and swift, but it’s been very up and down. A couple of weeks ago we were almost completely… we had very few cases, maybe in the double digits in the main city area, but we’re at 88 in the next door island, and they’ve got a whole block quarantined off. It’s expected to reach us as well so they’re becoming more strict. Because our population is so small, the effects are very quick - we get better quickly but also get worse very quickly and it seems like it’s getting worse. It’s very tough - we don’t grow a lot of things so we get food and everything through  imports. You see the changes through the grocery stores and whether we have oyster sauce or ketchup, and you’re like ‘Oh we don’t have vegetables,’ so we’ll have to wait a couple of weeks to get cabbages.

Has your work with CLAN impacted the way you think about COVID or your actions relating to the pandemic?
Working with CLAN obviously, in contact with people in NSW and different geography, different responses, different culture… it’s been very interesting seeing the very big disconnect in how we’re living our lives. I just travelled, where I see you guys just gone swiftly into lockdown and it’s completely gone really bad, and that happened very unexpectedly. While I was in lockdown a couple months ago you guys were doing fine - it’s very the opposite reactions are happening.. I guess it’s created more worry and empathy in my own actions, and I really don’t want to take what I have for granted as I’m seeing completely different responses and different… yeah it's so different in different parts of the world. I’m a lot more grateful for what I have, and also more cautious, keeping in mind that it can change at any time.

Where do you see yourself in 5 years?
Oh no, oh this is… as a university student, this is very mean for you guys to include this stuff in. In 5 years hopefully I'm working conjointly with the Maldives as well as maybe with an NGO in Canada. An NCD alliance is being setup in the Maldives so I really want to be a part of that and help that community grow, where I'm from, even though I'm going to be in Canada hopefully and working there. That’s been kind of my goal for now, just like see what I can do abroad but also try foster the community in the Maldives that may be growing.